This is the first post in a series regarding the District’s November 7 operating levy and bond referendum election. The first question will ask voters to revoke the current operating levy of $1,497.17 per student and replace it with an operating levy increased by $470.15 per student to $1,967.32 for 10 years to be adjusted for inflation. The operating levy is critical in ensuring our current programming is sustainable given the chronic underfunding of Minnesota schools by the Legislature. The second question, contingent upon the first question passing, will ask voters to authorize the District to sell $109 million bonds (paid back over 25 years) to finance components of the Master Facilities Plan. This includes constructing a new elementary school at the same location as the current Greenvale Park Elementary and repurposing that building as an early childhood center, constructing a new high school on the current high school property and demolishing the existing high school, and modest renovations or additions at Bridgewater Elementary, Sibley Elementary, and Longfellow School. The elementary projects are projected to cost $30.5 million and a new high school is estimated to cost $78.5 million. You can learn much more about the District’s operating levy and bond referendum election at https://northfieldschools.org/referendum.

Below is a guest post authored by Director of Buildings and Grounds Jim Kulseth about the renovation vs. new construction at Northfield High School:

I have worked in a number of buildings during my years of public service. I have seen many 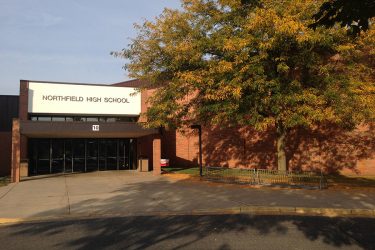 variations of educational architecture. Some work very well while others fall short of expectations. It is clearly evident that building maintenance at Northfield Public Schools has always been a priority. And although the basic structure of the NHS building is sound and in serviceable condition, I do have some genuine concerns in some important areas of infrastructure. I have briefly summarized them below.

The plumbing, HVAC, and electrical systems are mostly original to the structure. Although updated with some electronic management controls, the basic pieces are several decades old and cannot be brought up to today’s standards without complete replacement. Several of the air handling units are placed on the ground in courtyards rather than on rooftops or in mechanical rooms. These have posed challenges for years, with maintenance being difficult and the effects of Mother Nature taking their toll on parts that were better designed for rooftop or indoor use. We have recently experienced plumbing and drain issues with pipes failing from age. Also at issue are the mechanical access tunnels around the perimeter of the building. They were never really completed and the dirt floors remain to this day. They are hazardous workspaces and were not designed with any consideration for future maintenance or equipment replacement.  They also retain water, giving us additional challenges with environmental control, maintenance, and repairs on the aging infrastructure of the building.

Many exterior features are also reaching the end of their useful life. Much of the brick exterior is in need of tuck-pointing and complete restoration in some areas. The exterior doors and storefronts are failing. There are door frames rusting and showing fatigue from use. Some are flexing so much that doors do not close completely. The windows are mostly single pane glass adding very little thermal efficiency. Most of the classroom teachers complain of cold drafts from the windows and lack of natural lighting.

While the classroom spaces have been modified over the years in an attempt to keep up with technology and the ever-changing world of education, they have not. To have adaptable and flexible learning spaces for the present and future, the current classroom model at NHS would need to change drastically. In order to meet this need, the current rooms (and wings) would need to be completely gutted and remodeled. This remodeling would allow for some flexible and collaborative learning spaces while retaining some traditional classroom spaces. Considering the current sprawling layout of NHS, I do not believe this can be accomplished easily. Nor do I believe it would be a responsible expense, as the cost to remodel would be high and we would still be left with the same inherent issues of the old infrastructure.

While the physical size of the current building meets the immediate needs of the students, what of the future? The history of NHS is to add on another wing in order to meet the student needs. If any further expansion would be needed, it would only further complicate an already sprawling campus. I believe it is time to redesign the entire property, making the best use of our indoor and outdoor spaces.

Looking towards the future, we do not know what the next steps in education will be. What skills will be needed to succeed in the workplace in 10-20 years? Money spent on attempting to adapt the current structure, in the long term will be more costly than constructing a new building. A new building would take into consideration the potential needs of future students by providing ways to adapt spaces quickly, easily, and inexpensively. This could also go one step further- The new buildings mechanical systems can be built knowing that they will need to be replaced in the future. Older construction methods simply did not take these things into consideration. The older buildings were built to withstand the test of time and Mother Nature. Our current HS building has done just that! In several ways, it has far surpassed what was originally expected from its designers and builders. I am positive of this.

Another area to consider is simply building use. While the current NHS was built to be a school, it currently has spaces that are leased year around. A new building would take the needs of the community into consideration during the design process. This could offer more spaces for use by the entire community, making the building a 12-month asset to the city and residents.

Building codes and methods have improved significantly in the 50+ years since the current building’s design. The efficiency of a new building would be considerably improved. This would give the opportunity for a new building to be a more sustainable part of the community, while at the same time less of a burden to taxpayers.

Please feel free to reach out to Jim or me with questions about the bond referendum portion of the election.